Remaking the World for Robots 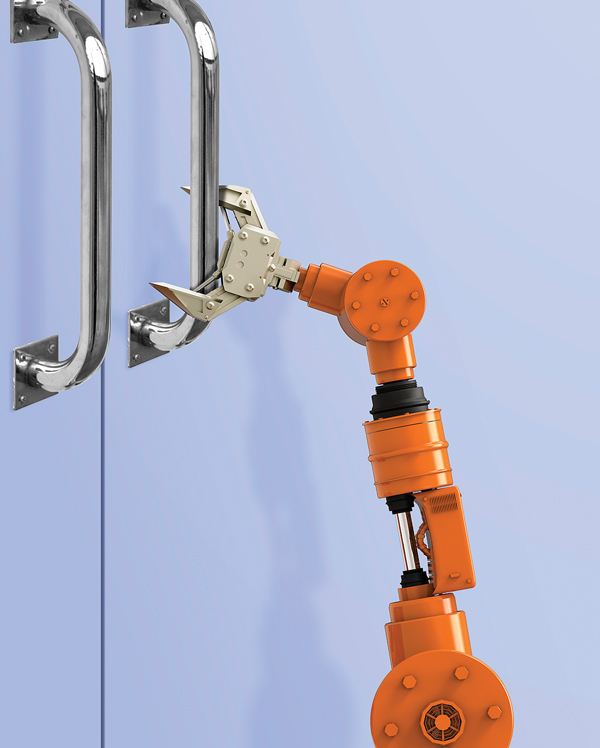 Over time, we will design physical spaces to accommodate robots and augmented reality

Every time I’m in a car in Europe and bumping along a narrow, cobblestone street, I am reminded that our physical buildings and infrastructure don’t always keep up with our technology. Whether we’re talking about cobblestone roads or the lack of Ethernet cables in the walls of old buildings, much of our established architecture stays the same while technology moves forward.

But embracing augmented reality, autonomous vehicles, and robots gives us new incentives to redevelop our physical environments. To really get the best experience from these technologies, we’ll have to create what Carla Diana, an established industrial designer and author, calls the “robot-readable world.”

Diana works with several businesses that make connected devices and robots. One such company is Diligent Robotics, of Austin, Texas, which is building Moxi, a one-handed robot designed for hospitals. Moxi will help nurses and orderlies by taking on routine tasks, such as fetching supplies and lab results, that don’t require patient interaction. However, many hospitals weren’t designed with rolling robots with pinchers for hands in mind.

Moxi can’t open every kind of door or use the stairs, so its usefulness is limited in the average hospital. For now, Diligent sends a human helper for Moxi during test runs. But the company’s thinking is that if hospitals see the value in an assistive robot, they might change their door handles and organize supplies around ramps, not stairs. The bonus is that these changes would make hospitals more accessible to the elderly and those with disabilities.

This design philosophy doesn’t have to be limited to the hospital, however. Autonomous cars will likely need road signs that are different from the ones we’ve grown accustomed to. Current road signs are easily read by humans, but they could be vandalized so as to trick autonomous vehicles into interpreting them incorrectly. Delivery drones will need markers to navigate as well as places to land, if Amazon wants to get serious about delivering packages this way.

Google has already developed one solution. Back in 2014, the company invented plus codes. These are short codes for places that don’t traditionally have street names and numbers, such as a residence in a São Paulo favela or a point along an oil pipeline. These codes are readable by humans and machines, thus making the world a little more bot friendly.

Augmented reality (AR) also stands to benefit from this new design philosophy. Mark Rolston is the founder and chief creative officer of ArgoDesign, a company that helps tech companies design their products. Rolston has found that bringing AR—such as Magic Leap’s head-mounted virtual retinal display—into offices and homes can be tough, depending on the environment. For example, the Magic Leap reads glass walls as blank space, which results in AR images that are too faint to show up on the surface.

AR also struggles with white or dark walls. Rolston says the ideal wall is painted a light gray and has curved edges rather than sharp corners. While he doesn’t expect every room in an office or home to follow these guidelines, he does think we’ll start seeing a shift in design to accommodate AR needs.