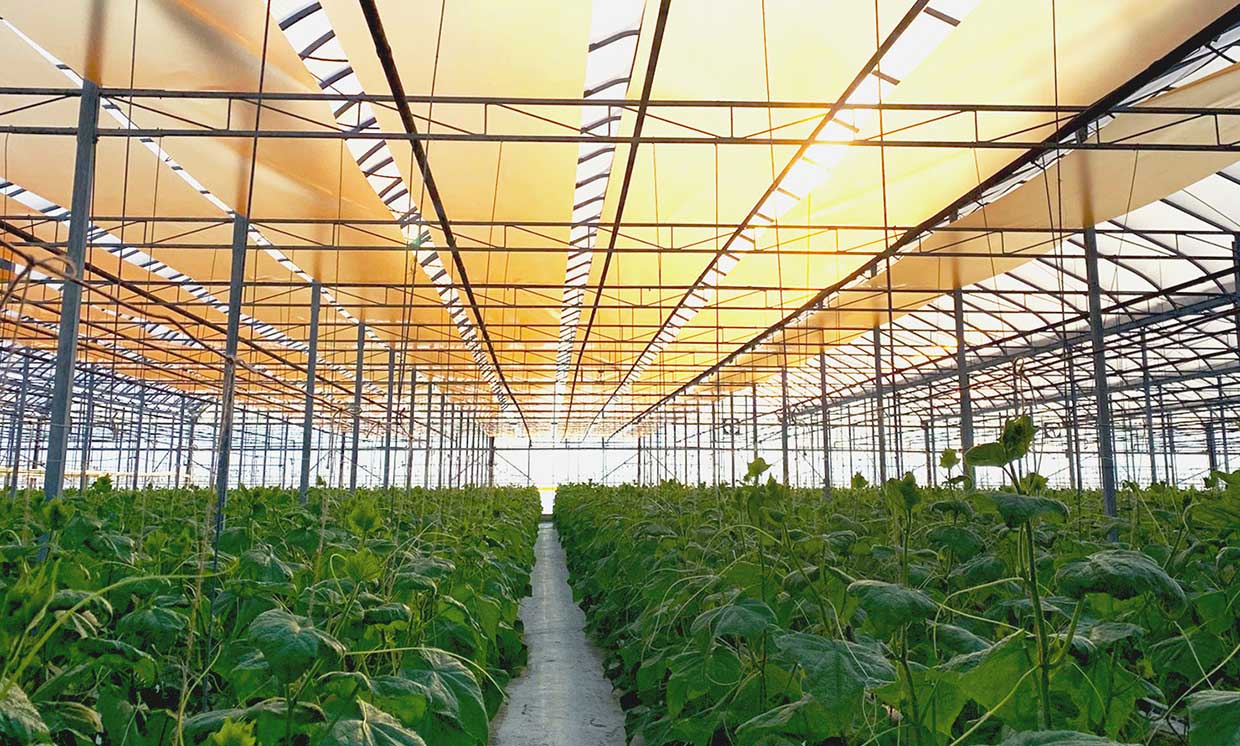 Quantum dots, the nanoparticles that improve color reproduction in TV displays, are migrating from the TV to the farm

In the consumer electronics industry, quantum dots are used to dramatically improve color reproduction in TV displays. That’s because LCD TV displays, the kind in most of our living rooms, require a backlight. This light is typically made up of white, or white-ish LEDs. The LCD filters the white light into red, green, and blue pixels; their combinations create the colors that appear on the screen.

Before quantum dots, filtering meant that much of the light didn’t make it to the screen. Putting a layer of quantum dots between the LEDs and the LCD, however, changes that equation. QD TVs use blue LEDs as the light source, then take advantage of the quantum effect to shift some of that light to tightly constrained red and green wavelengths. Because only this purified light reaches the filters—instead of the full spectrum that makes up white light—far less is blocked and wasted.

It turns out that this same approach to making your TV picture better can make plants grow faster, because plants, like LCD filters, are tuned to certain colors of light.

Overall, plants don’t absorb much green light; they reflect it, and so leaves appear green. Certain plants are even more picky, as recent research using different colors of LEDs for lighting greenhouses has shown. Some Dutch growers, for example, are growing tomatoes under a magenta light, roses under a whiter light, and peppers under a more yellow hue in an effort to give plants exactly the light that produces the best results.

Given that quantum dots can be tuned to take incoming light and shift it to a specific part of the spectrum without blocking any of the light’s energy as traditional filters do, why not use them to shift sunlight’s spectrum and enhance plant growth?

That’s what Hunter McDaniel and his colleagues at UbiQD asked themselves back in 2016, when they were thinking about possible applications for the cadmium-free quantum dots McDaniel had been developing. Back when McDaniel was working with quantum dots as a researcher at Los Alamos National Laboratory, he realized that copper indium sulfide (then being developed for use in thin-film solar cells) could also replace toxic cadmium in the manufacture of quantum dots. McDaniel started UbiQD in 2014 to commercialize the technology.

“We looked at a few possible applications,” he says. “And the one that rose to the top is agriculture, where the demand for the product could be huge—more than a billion square meters of quantum dot film deployed annually.”

Initially, McDaniel told me, company representatives started talking to growers to determine their interest in another product in development, electricity-generating windows that use quantum dots to help gather sunlight for solar cells. It turned out, McDaniel said, that while growers thought reducing electricity costs would be nice, they were much more concerned about how crop yield affected their profit margins; if electricity producing windows reduced yield even a little bit, they would likely not be interested. So UbiQD researchers began looking into making sure electricity-generating windows wouldn’t reduce yield, tweaking the quantum dots into the mix. They then focused their effort to enter the greenhouse market on using quantum dots themselves to improve crop yields.

They came up with the idea of producing long sheets of QD film, designed to be installed below the glass of a greenhouse to shift the spectrum of sunlight. Their first product produces an orange light at a wavelength around 600 nanometers. Company researchers have repeatedly tested this film on lettuce crops grown at the University of Arizona in a project funded by NASA.  McDaniel reports that the team has done other QD film testing in New Mexico, focused on tomatoes, cucumbers, and herbs; in the Netherlands on strawberries and tomatoes; in Colorado on hemp; in California and Oregon on cannabis; and in Canada, on cucumbers and tomatoes. UbiQD recently started selling the film commercially to growers in Asia, Europe, and the U.S.

While, to date, UbiQD has been producing its own QD film, in May it announced a partnership with Nanosys, a quantum dot manufacturer that has been providing QD film to TV manufacturers since 2013.

“For agriculture,” McDaniel says, “you have to go big quickly to prove the concept. Nanosys, which has already captured economies of scale through its work with the TV industry, was the obvious partner.”

While, at the moment, orange film is the only variety going into mass production, UbiQD is “exploring different light recipes,” McDaniel said. The company has also received multiple grants from NASA to develop a product for use in space. Plants in space, he says, have to be protected from harmful UV rays; QDs could both protect the plants and repurpose that incoming UV light into wavelengths that plants could use for photosynthesis. [READ MORE]