Researchers Use Lasers to Bring the Internet Under the Sea 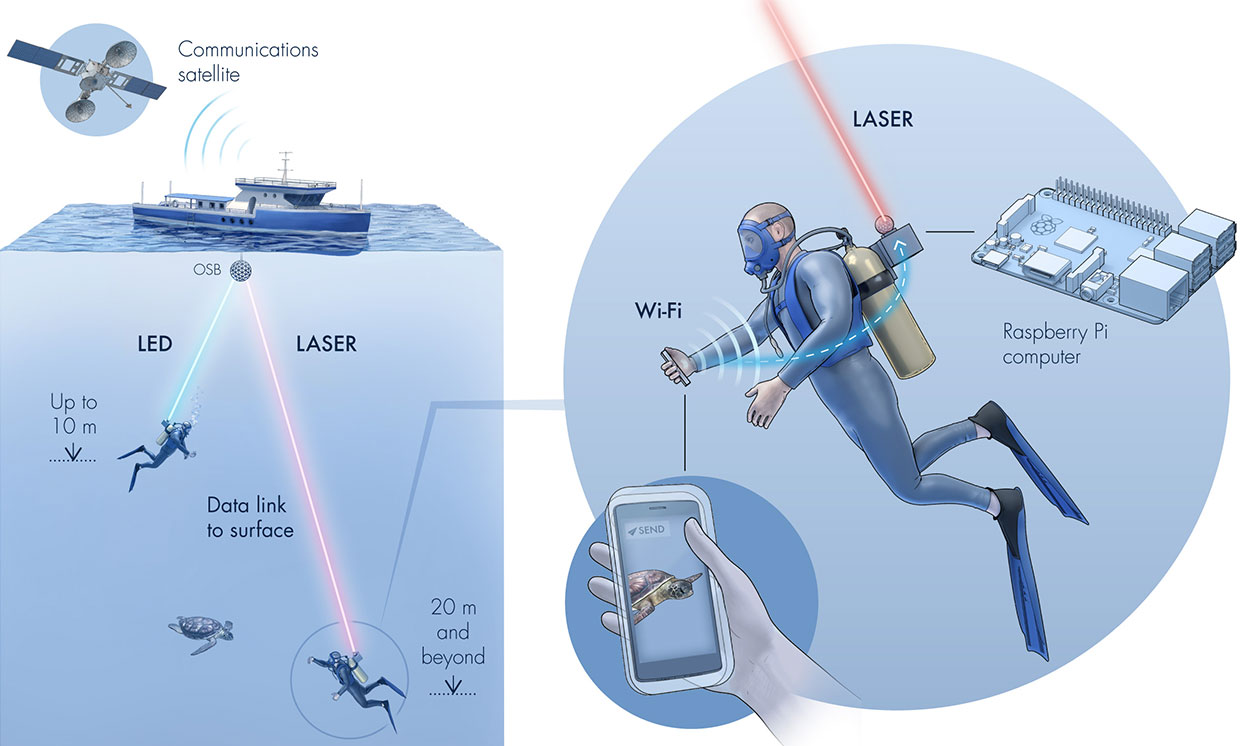 Communicating underwater has always been a hassle. Radio transmissions, the ubiquitous wireless standard above the waves, can’t transmit very far before being entirely absorbed by the water. Acoustic transmissions (think sonar) are the preferred choice underwater, but they suffer from very low data rates. Wouldn’t it be nice if we could all just have Wi-Fi underwater instead?

Underwater Wi-Fi is exactly what researchers at the King Abdullah University of Science and Technology (KAUST) in Thuwal, Saudi Arabia, have developed. The system, which they call Aqua-Fi, uses a combination of lasers and off-the-shelf components to create a bi-directional wireless connection for underwater devices. The system is fully compliant with  IEEE 802.11 wireless standards, meaning it can easily connect to and function as part of the broader Internet.

Here’s how it works: Say you have a device underwater that needs to transmit data (for the KAUST researchers, it was waterproofed smartphones). They then used a regular old Wi-Fi signal to connect that device to an underwater “modem.” Specifically, they used a Raspberry Pi to function as that modem. The Raspberry Pi converted the wireless signal to an optical signal (in this case, a laser) that was beamed to receiver attached to a surface buoy. From there, established communications techniques were used to send the signal to an orbiting satellite. For the underwater device to receive data, the process is simply reversed.

Aqua-Fi stems from work that the KAUST researchers did back in 2017, when they used a blue laser to transmit a 1.2-gigabit file underwater. But that wasn’t interesting enough, according to Basem Shihada, an associate professor of computer science at KAUST and one of the researchers on the Aqua-Fi project. “Who cares about submitting just a file?” he says. “Let’s do something with a bit more life.”

It was that thinking that spurred the team to start looking at bi-directional communications, with the ultimate goal of building a system that can transfer high-resolution video.

Shihada says it was important to him that all of the components be off the shelf. “My first rule when we started this project: I do not want to have something that is [custom made for this],” he says. The only exception is the circuit in the Raspberry Pi that converts the wireless signal to an optical signal and vice versa.

The team used LEDs instead of lasers in their first design, but found the LEDs were not powerful enough for high data rates. With LEDs, the beams were limited to distances of about 7 meters and data rates of about 100 kilobits per second. When they upgraded to blue and green lasers, they achieved 2.11 megabits per second over 20 meters.

Shihada says that currently, the system is limited by the capabilities of the Raspberry Pi. The team burned out the custom circuit responsible for converting optical and wireless signals when, on two occasions, they used a laser that was too powerful. He says that in order for this setup to incorporate more powerful lasers that can both communicate farther and transmit more data, the Raspberry Pi will need to be swapped out for a dedicated optical modem.

Even with the limitations of the Raspberry Pi, the KAUST researchers were able to use Aqua-Fi to place Skype calls and transfer files.

But there’s still a big problem that needs to be addressed in order to make a system like Aqua-Fi commercially viable; and it can’t be solved as easily as swapping out the Raspberry Pi. “If you want to imagine how to build the Internet underwater,” says Shihada, “laser alignment remains the most challenging part.” Because lasers are so precise, even mildly turbulent waters can knock a beam off course and cause it to miss a receptor.

The KAUST researchers are exploring two options to solve the alignment problem. The first is to use a technique similar to the “photonic fence” developed to kill mosquitoes. A low-power guide laser would scan for the receptor. When a connection is made, it would inform another, higher-powered laser to begin sending data. If the waves misaligned the system again, the high-power laser would shut off and the guide laser would kick in, initiating another search.

The other option is a MIMO-like solution using a small array of receptors, so that even if the laser emitter is jostled a bit by the water, it will still maintain a connection.

You might still be asking yourself at this point why anyone even needs the Internet underwater? First, there’s plenty of need in underwater conservation for remote monitoring of sea life and coral reefs, for example. High definition video collected and transmitted by wireless undersea cameras can be immensely helpful to conservationists.

But it’s also helpful to the high-tech world. Companies like Microsoft are exploring the possibility of placing data centers offshore and underwater. Placing data centers on the ocean floor can perhaps save money both on cooling the equipment as well as energy costs, if the kinetic energy of the waves can be harvested and converted to electricity. And if there are data centers underwater, the Internet will need to be there too. [READ MORE]