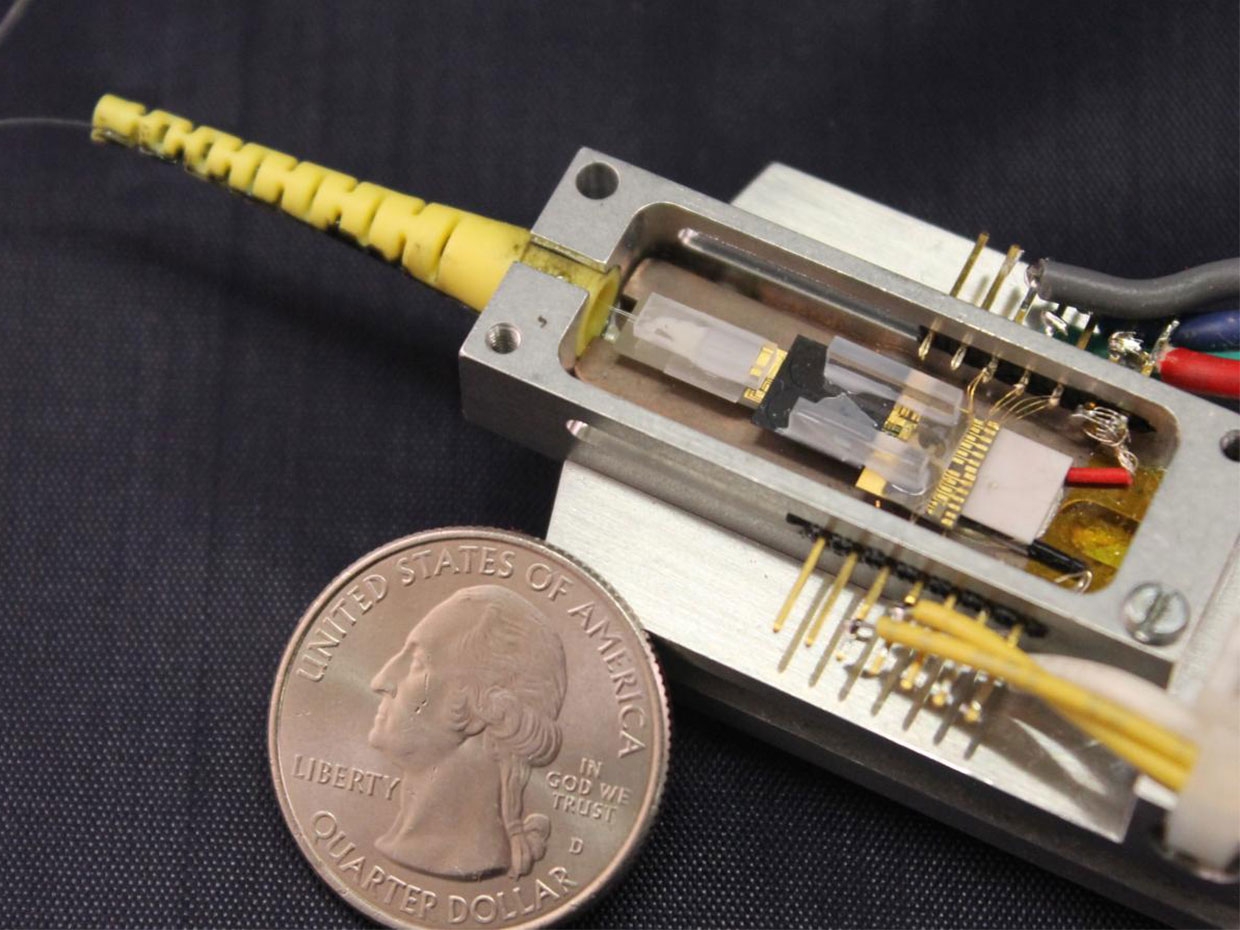 A weakness of lasers integrated onto microchips is how they can each generate only one color of light at a time. Now researchers have come up with a simple integrated way to help these lasers fire multiple colors, a new study finds.

When it comes to data and telecommunications applications, integrated lasers would ideally generate multiple frequencies of light to boost how much information they could transmit. One way to achieve this end is an “optical frequency comb,” which converts a pulse of light from a single laser into a series of pulses equally spaced in time and made up of different, equally spaced frequencies of light.

Generating combs long required equipment that was expensive, bulky, complex, and delicate. However, in the past decade or so, researchers began developing miniature and integrated comb systems. These microcombs passed light from a laser through a waveguide to a microresonator—a ring in which circulating light could become a soliton, a kind of wave that preserves its shape as it travels. When solitons left these microresonators, they each did so as very stable, regular streams of pulses—in other words, as frequency combs.

But to generate and stabilize these solitons, microcombs needed complex tuning schemes and feedback loops to control the frequency and power of the system. These in turn required optical and electrical components that were difficult to integrate.

Now scientists have devised an integrated way to generate solitons in microcombs on demand, without all the control systems needed previously. The team, from the California Institute of Technology, the Swiss Federal Institute of Technology Lausanne and the University of California, Santa Barbara, detailed its findings in the 17 June online edition of the journal Nature.

Previous microcombs isolated the laser from the rest of the system to prevent any problems from feedback, a strategy that required complicated tuning. The new microcomb does away with this isolation; the feedback resulting from the microresonator produces interference that actually helped greatly reduce noise in the system. That made it much easier to generate solitons.

“When the laser and resonator were in one interacting device, it turned out to work orders of magnitude better than the laser by itself. The amount of noise in the system went down by a factor of 1,000 or 10,000,” says study co-author John Bowers, a physicist at the University of California, Santa Barbara. “That was unanticipated.”

The scientists created the smallest comb systems to date. Combs that operated at gigahertz frequencies were roughly 5 square millimeters in size; those operating at terahertz frequencies had a 1-square-millimeter footprint, Bowers says.

In theory, a microcomb could help an integrated laser generate hundreds or thousands of different colors, instead of just one, Bowers notes. Light from the input laser had a 1,556-nanometer wavelength; the frequency comb generated pulses ranging from 1,540 to 1,580 nanometers, he says.

In the future, instead of having two chips—the laser and the microcomb—soldered onto a plate, the aim is to have them integrated into one chip, Bowers says. In addition to data and telecommunications applications, he notes, microcombs could also find use in optical clocks, which provide the most accurate time measurements in the world. Current optical clocks are large, heavy, and expensive, but with integrated photonics, they could fit in a wristwatch and prove affordable. What’s more, they could potentially lead to more compact, more sensitive GPS receivers, among other applications, he adds. [READ MORE]