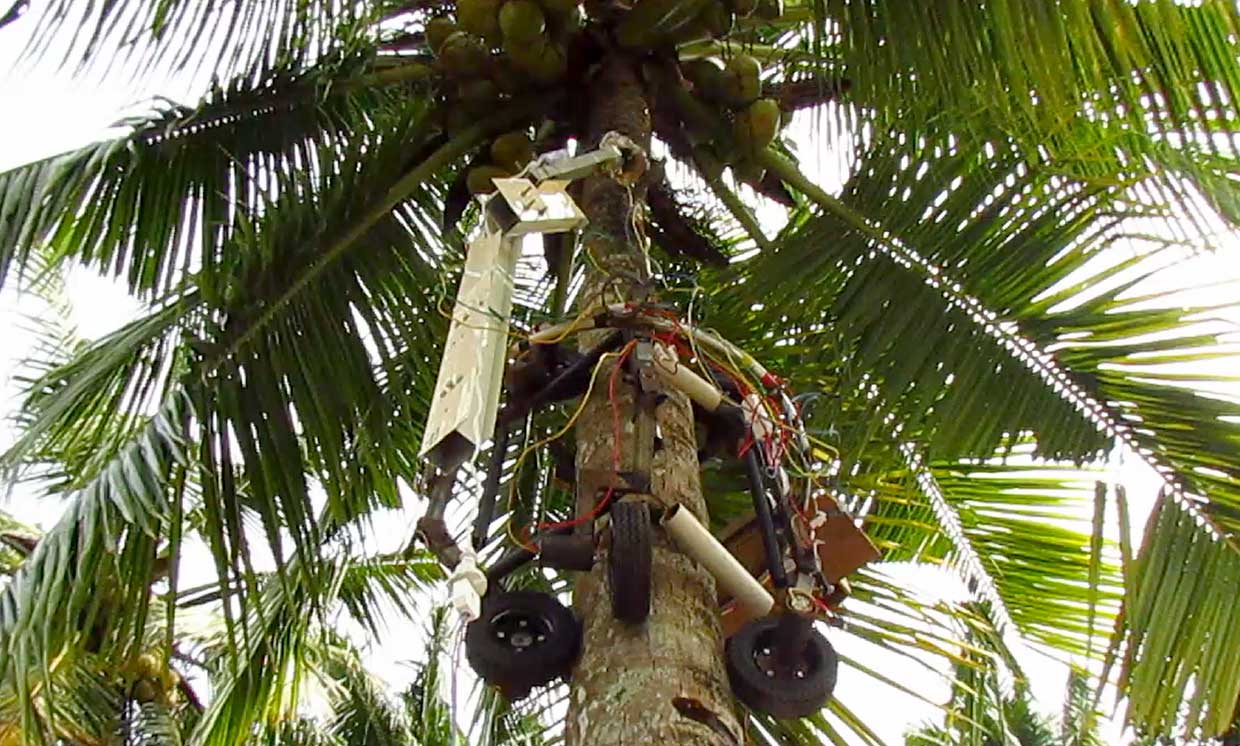 Coconuts may be delicious and useful for producing a wide range of products, but harvesting them is no easy task. Specially trained harvesters must risk their lives by climbing trees roughly 15 meters high to hack off just one bunch of coconuts. A group of researchers in India has designed a robot, named Amaran, that could reduce the need for human harvesters to take such a risk. But is the robot up to the task?

The researchers describe the tree-climbing robot in a paper published in the latest issue of IEEE/ASME Transactions on Mechatronics. Along with lab tests, they compared Amaran’s ability to harvest coconuts to that of a 50-year-old veteran harvester. Whereas the man bested the robot in terms of overall speed, the robot excelled in endurance.

To climb, Amaran relies on a ring-shaped body that clasps around trees of varying diameter. The robot carries a control module, motor drivers, a power management unit, and a wireless communications interface. Eight wheels allow it to move up and down a tree, as well as rotate around the trunk. Amaran is controlled by a person on the ground, who can use an app or joystick system to guide the robot’s movements.

Once Amaran approaches its target, an attached controller unit wields a robotic arm with 4 degrees of freedom to snip the coconut bunch. As a safety feature, if Amaran’s main battery dies, a backup unit kicks in, helping the robot return to ground.

Rajesh Kannan Megalingam, an assistant professor at Amrita Vishwa Vidyapeetham University, in South India, says his team has been working on Amaran since 2014. “No two coconut trees are the same anywhere in the world. Each one is unique in size, and has a unique alignment of coconut bunches and leaves,” he explains. “So building a perfect robot is an extremely challenging task.” [READ MORE]