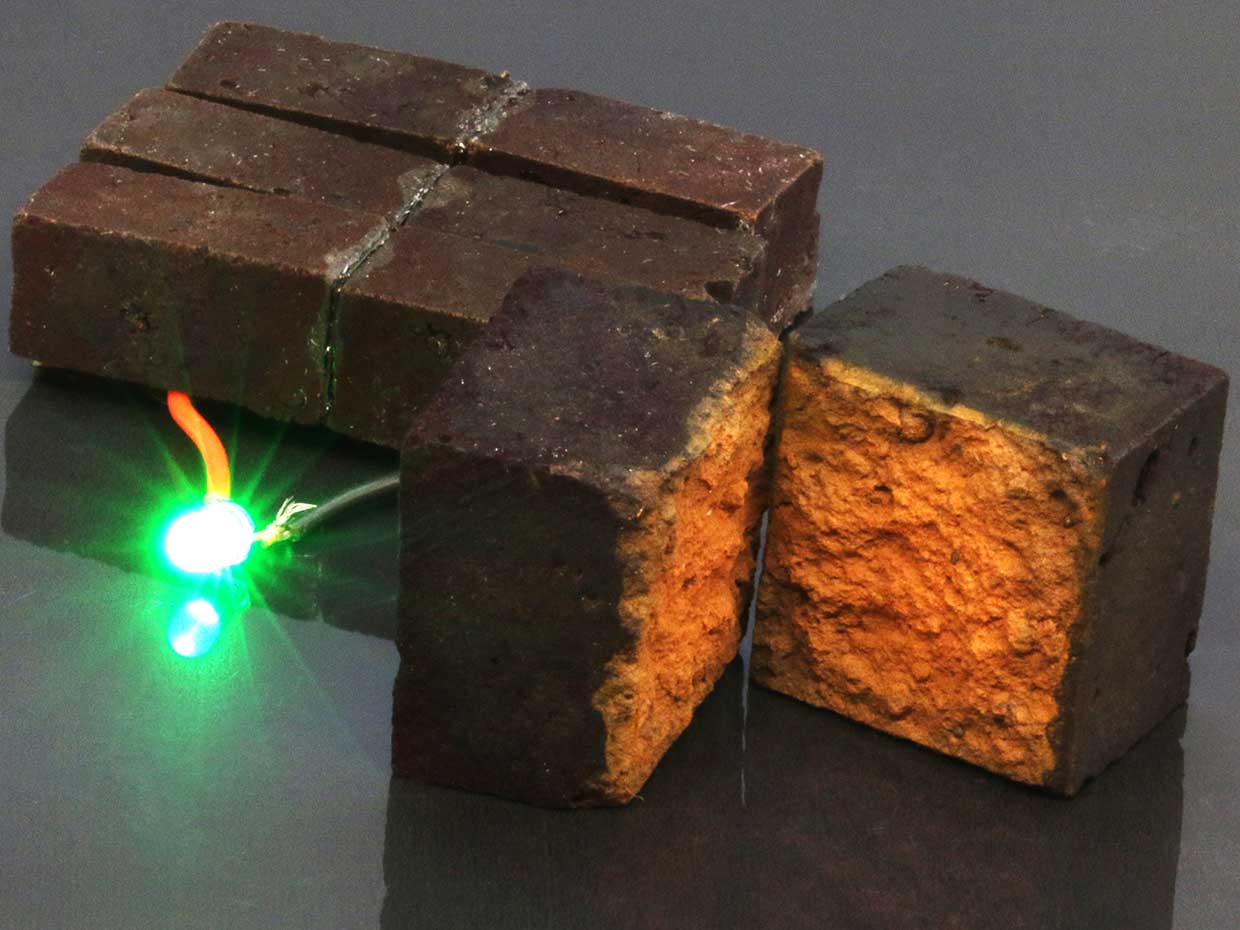 Researchers at Washington University in St. Louis made a fast energy storage device out of common building bricks

As solar panels and wind turbines multiply, the big problem is how to store all the excess electricity produced when the sun is up or the wind blowing so that it can be used at other times. Potential solutions have been suggested in many forms, including massive battery banks, fast-spinning flywheels, and underground vaults of air. Now a team of researchers say a classic construction material—the red fired brick—could be a contender in the quest for energy storage.

The common brick is porous like a sponge, and it’s red color comes from pigmentation that is rich in iron oxide. Both features provide ideal conditions for growing and hosting conductive polymers, Julio D’Arcy and colleagues have found. The team at Washington University in St. Louis transformed basic blocks into supercapacitors that can illuminate a light-emitting diode.

Supercapacitors are of interest because, unlike batteries, they can deliver blindingly fast bursts of power and they recharge quickly. The downside is that, kilogram for kilogram, they store relatively little energy compared to batteries. In an electric vehicle, a supercapacitor supports acceleration, but the lithium-ion module is what provides power for hundreds of miles. Yet many scientists and technology developers are hoping supercapacitors can replace conventional batteries in many applications, owing to the steep environmental toll of mining and disposing of metals.

The building brick proof-of-concept project presents new possibilities for the world’s many brick walls and structures, said D’Arcy, an assistant professor of chemistry at Washington University. Rooftop solar panels connected by wires could charge the bricks, which in turn could provide in-house backup power for emergency lighting or other applications.

“If we’re successful [in scaling up], you’d no longer need batteries in your house,” he said by phone. “The brick itself would be the battery.”

The novel device, described in Nature Communications on Tuesday, is a far cry from the megawatt-scale storage projects underway in places like California’s desert and China’s countryside. But D’Arcy said the paper shows, for the first time, that bricks can store electrical energy. It offers “food for thought” in a sector that’s searching for ideas, he noted.

Researchers began by buying armfuls of 65-cent red bricks at a big-box hardware store. At the lab, they studied the material’s microstructure and filled the bricks’ many pores with vapors. Next, bricks went into an oven heated to 160° Celsius. The iron oxide triggered a chemical reaction, coating the bricks’ cavities with thin layers of PEDOT, the polymer known as poly(3,4- ethylenedioxythiophene).

Bricks emerged from the oven with a blackish-blue hue—and the ability to conduct electricity. [READ MORE]