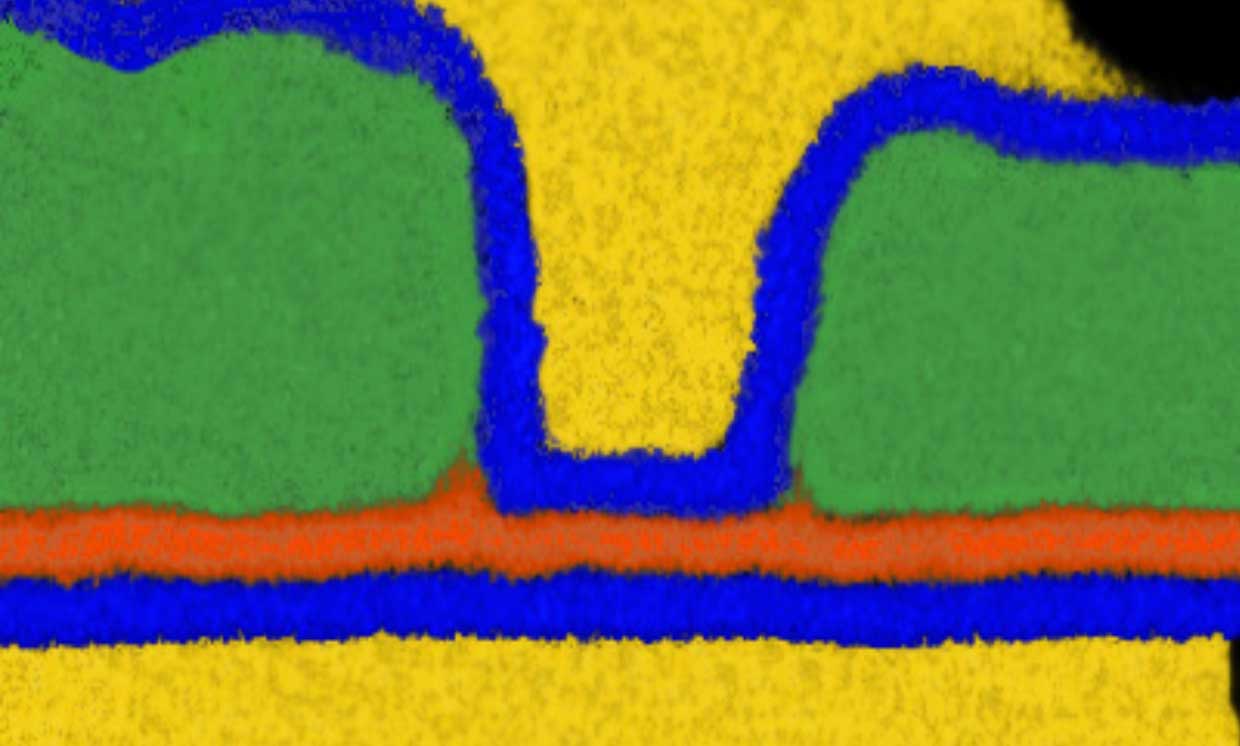 One of the biggest problems in computing today is the “memory wall”—the difference between processing time and the time it takes to shuttle data over to the processor from separate DRAM memory chips. The increasingly popularity of AI applications has only made that problem more pronounced, because the huge networks that find faces, understand speech, and recommend consumer goods rarely fit in a processor’s on-board memory.

In December at IEEE International Electron Device Meeting (IEDM), separate research groups in the United States and in Belgium think a new kind of DRAM might be the solution. The new DRAM, made from oxide semiconductors and built in the layers above the processor, holds bits hundreds or thousands of times longer than commercial DRAM and could provide huge area and energy savings when running large neural nets, they say.

The DRAM memory cells in your computer are made from a single transistor and a single capacitor each, a so-called 1T1C design. To write a bit to the cell, the transistor is turned on and charge is pushed into (1) or removed from (0) the capacitor. To read from it, the charge (if there is any) is withdrawn and measured. This system is superfast, cheap, and consumes little power, but it has some downsides. For one, reading the bit drains the capacitor, so reading means writing the bit back to memory. What’s more, even if you don’t read the bit, charge will eventually leak out of the capacitor through the transistor. So all the cells need to be periodically refreshed just to keep the data. In modern DRAM chips, that’s done every 64 milliseconds.

Embedding DRAM in a processor chip is done commercially, but it has its limits. “The challenge with the monolithic 1T1C design has always been the difficulty of building the capacitor as well as fabricating a transistor with ultra-low leakage,” using a manufacturing process meant for logic transistors, says Arijit Raychowdhury, a professor of electrical and computer engineering at Georgia Tech, who worked with researchers at Notre Dame University and the Rochester Institute of Technology on a new embedded DRAM. Good capacitors are difficult to make in manufacturing processes built for logic circuits.

The new embedded DRAM is instead made from two transistors only, no capacitor (2T0C). This works because a transistor’s gate is a natural, though small, capacitor. So the charge representing the bit can be stored there. This design has some key benefits, especially for AI.

One is that writing and reading involve separate devices, explains Raychowdhury. So you can read from a 2T0C DRAM cell without destroying the data and having to rewrite it. All you have to do is see if current flows through the transistor whose gate is holding the charge. If the charge is there, it will turn the transistor on. Current flows. If there’s no charge there, current is stopped.

Easy reading is especially important for AI, because neural networks tend to read at least three times for every write, Jorge Gomez, a graduate student at Notre Dame in the laboratory of Suman Datta, told IEDM attendees.

But a 2T0C arrangement doesn’t work well with silicon logic transistors, says Raychowdhury. Any bit would drain away immediately because the transistor gate capacitance is too low and the leakage through the transistors is too high. So researchers are turning to devices made with amorphous oxide semiconductors, like those used to control pixels in some displays.

These have several admirable qualities. Notably, they can drive a lot of current, which makes writing quicker, and when they are off they leak very little charge, which makes bits last longer. The U.S.-based team used indium oxide doped to about 1 percent with tungsten as their semiconductor, IWO for short. The device’s on currents “are some of the best reported for oxide transistors,” says Raychowdhury. “It gives you enough read/write speed for logic operations. At same time off currents are really small…two to three orders smaller than the best you get with silicon.” In fact, the team had to build an extra-large version of the device in order to get any measurement of current leakage at all.

Just as important is that oxides like these can be processed at (relatively) low temperatures. That means devices made from them can be constructed in the layers of interconnects above a processor’s silicon without damaging the silicon devices below. Building memory cells there gives a direct, high-bandwidth path for data to get to processing elements on the silicon, effectively knocking down the memory wall. [READ MORE]