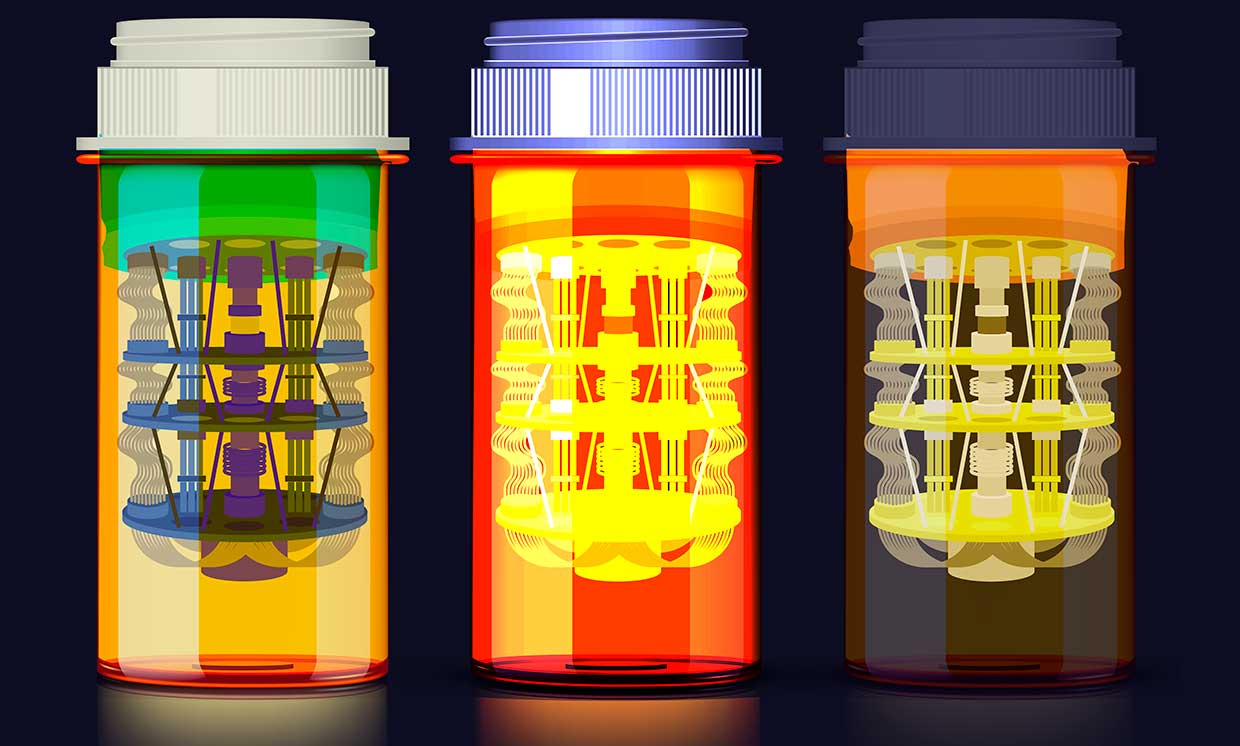 Theoretically, quantum computers can prove more powerful than any supercomputer. And recent moves from computer giants such as Google and pharmaceutical titans such as Roche now suggest drug discovery might prove to be quantum computing’s first killer app.

Whereas classical computers switch transistors either on or off to symbolize data as ones or zeroes, quantum computers use quantum bits, or qubits, that, because of the surreal nature of quantum physics, can be in a state of superposition where they are both 1 and 0 simultaneously.

Superposition lets one qubit essentially perform two calculations at once, and if two qubits are linked through a quantum effect known as entanglement, they can help perform 22 or four calculations simultaneously; three qubits, 23 or eight calculations; and so on. In theory, a quantum computer with 300 qubits could perform more calculations in an instant than there are atoms in the visible universe.

Recent initiatives from pharmaceutical giants suggest the drug industry is paying more and more attention to quantum computing. For example, in January, the world’s largest private drug company, Boehringer Ingelheim, announced it would partner with Google to use quantum computing in pharmaceutical R&D. That same month, Roche, the world’s largest pharmaceutical company, revealed it was collaborating with Cambridge Quantum Computing to design quantum algorithms for early-stage drug discovery and development.

“Google’s view is that chemistry is the near-term application for quantum computing, and I buy that as well,” says Chad Edwards, head of strategy and product at Cambridge Quantum Computing in England.

In theory, quantum computing can do a better job simulating molecules and chemical reactions than conventional high-performance computers (HPCs). “A molecule only as complex as caffeine is the upper limit for HPCs,” Edwards says. Caffeine has only 24 atoms. In contrast, “In pharma, you’re dealing with molecules much larger: proteins with thousands of atoms. When we want to understand how quantum mechanical systems like chemistry works, we want to use machines that think and work quantum mechanically.”

Cambridge Quantum Computing does not build or operate quantum computers itself, but instead develops software for such hardware. “We sit at the interface of big corporations like Roche, that want to use quantum computing but don’t know how to fit it into their organizations, and the IBMs, Honeywells, Microsofts and Googles of the world, that are not sure how quantum computing might be deployed inside different organizations,” Edwards says. “We’ve engaged with five of the top 10 pharma companies.”

Among the areas in which Cambridge Quantum Computing works is quantum chemistry. Major problems they help solve include: figuring out which molecules might bind most strongly to a protein of interest; the crystal structures of molecules; the states a molecule can adopt across a range of energies; the way in which molecules can interact and evolve over time; the ways in which a molecule might react in response to a spectrum of light; the reactions used to synthesize a compound; and how bodies metabolize a given drug, Edwards says.

The main algorithm used in such research is the variational quantum eigensolver. This is used to find the optimal solution to a problem, such as a molecule’s ground state, the one in which it has the least amount of energy. The variational quantum eigensolver is actually a hybrid algorithm, where classical computers do much of the work whereas quantum processors solve the part of the problem that would prove difficult for conventional machines to handle. “It’s the workhorse everyone in the industry uses now for quantum chemisty,” Edwards says.

A new algorithm Cambridge Quantum Computing is now using for quantum chemistry relies upon an approach called imaginary time evolution. The advantage this has over the variational quantum eigensolver: It is more resource-efficient and is less likely to pursue solutions that appear to be the best but are not, Edwards notes.

When it comes to what benefits quantum computing might bring to pharmaceutical research, “A lot of people jump to the conclusion that it will be faster than conventional methods,” Edwards says. “In some cases, it will be, but what we’re really aiming for is a level of accuracy not possible using classical machines.”

Big pharma is no longer simply conducting exploratory studies into whether quantum computing might help them with the bottom line, Edwards says. He added that major pharma companies have formed a consortium known as QuPharm to work together pre-competitively to advance quantum computing uses for drug production. QuPharm in turn is collaborating with the Quantum Economic Development Consortium (QED-C), which is devoted to helping develop commercial applications for quantum science and engineering. It is also partnering with the Pistoia Alliance, a consortium seeking to drive innovation in life science R&D. [READ MORE]