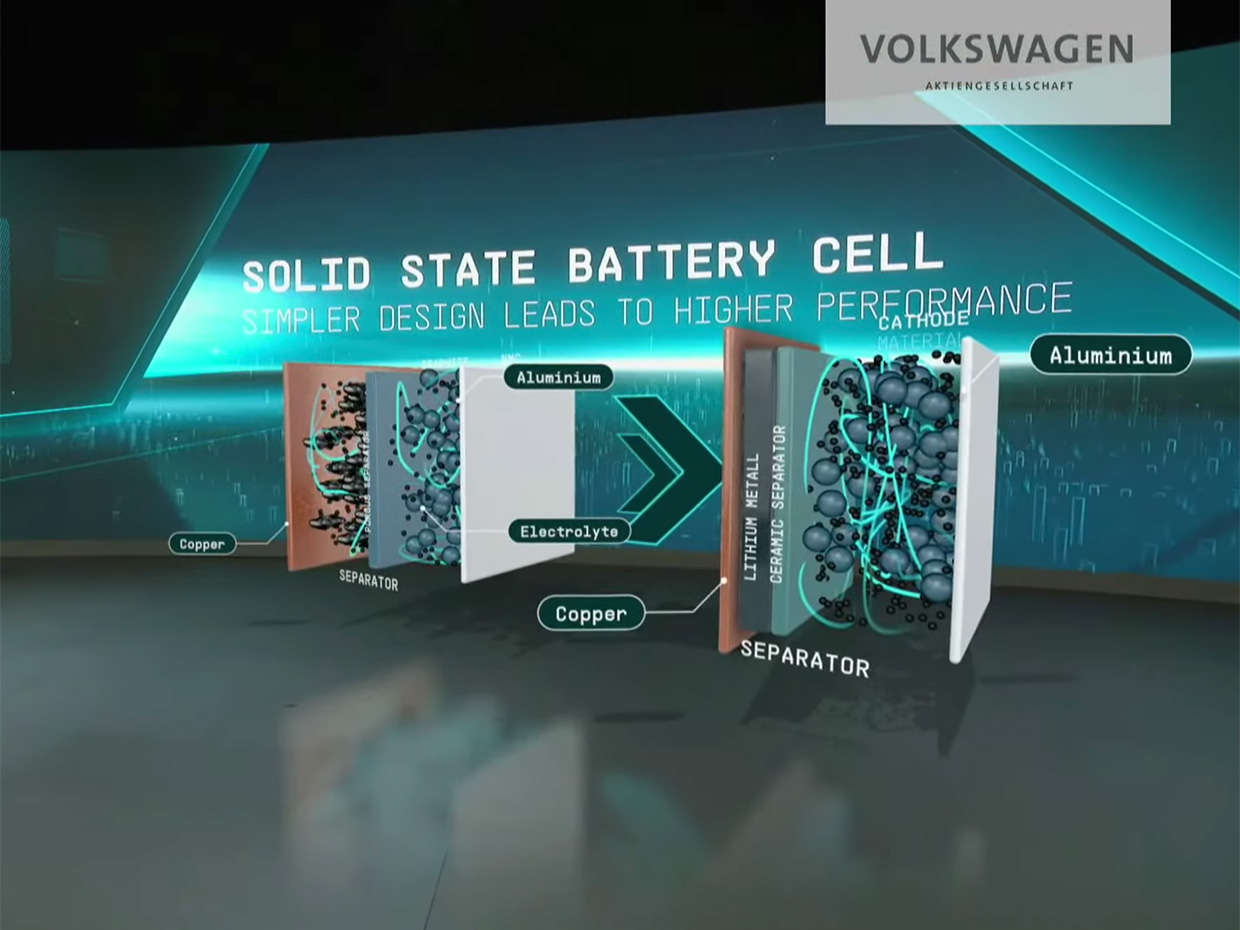 On Monday, Volkswagen presented a “power roadmap” to a future with cheaper, longer-range electric vehicles (EVs)—one driven by next-generation batteries and a vast network of charging infrastructure.

Recent years have seen many countries and carmarkers pivot from fossil fuels to electricity for transport, amid a global shift away from carbon. In 2019, there were over 7 million EVs worldwide (comprising roughly 1 percent of total cars on the road), but this figure is expected to skyrocket to 200 million by 2030. Volkswagen, the world’s largest car company, plans to make 26 million all-electric vehicles in the next decade.

But one of the biggest bottlenecks standing in the way of that transition is batteries. Consumers today lament that EVs can’t go very far (with a single-charge range of roughly 130 to 160 kilometers (80 to 100 miles)) and that they take too long to charge (30 minutes to a whole day). To overcome this, batteries need to be more powerful, longer-lasting, and cheaper.

Volkswagen seems confident its newly unveiled plans will meet these challenges. “Our goal is to secure a pole position in the global scaling of batteries,” said Diess.

To do so, the company will shift the majority (80 percent) of EVs in its pipeline towards a single next-generation battery format. Production of the ‘unified battery cell’—which boasts a prismatic instead of a cylindrical or pouch-style design—will begin in-house in 2023. The goal is to cut battery costs by as much as half, to below $100 per kilowatt-hour (kWh).

“The cost target for EVs is $80/kWh for parity with low-cost gasoline cars,” says Venkat Srinivasan, director of the Energy Department’s Argonne Collaborative Center for Energy Storage Science in Illinois.

To further slash prices, Volkswagen aims to recycle 95% of each battery pack—everything except the separator. The automaker launched a pilot recycling plant in January 2021, in Salzgitter, Germany.

It’s an important first step because supply chain challenges are impacting the prices of many raw materials used in EV batteries, including cobalt, nickel, and lithium, says Srinivasan. “We need to think about eliminating these critical materials, finding new sources for them, including through recycling.”

On Power Day, Volkswagen also announced plans to build multiple factories around the world to boost battery production. It aims to have six plants operating in Europe by 2030, each with a 40 gigawatt-hour (GWh) capacity. The first two will be located in Salzgitter and Skellefteå, Sweden.

“The commitment to investing in cell manufacturing capacity is also important as this can help manufacturers to minimize cost,” says James Frith, an analyst who heads energy storage research at BloombergNEF.

Additionally, Volkswagen will spend €400 million, or roughly $477 million, to expand its network of EV charging stations across Europe. It will work with partners in Italy, Germany, Spain, and the U.K. to create 18,000 fast-charging points—five times the current amount—by 2025. It will also ramp up the number of charging stations in North America and China.

But more immediately, Volkswagen wants customers to look forward to a new technology it will roll out next year: bidirectional charging. All vehicles built on the company’s MEB platform, its modular platform for EVs, will be able to store excess energy, say from a home’s solar panels. The energy can then be transferred back to the home network or other buildings when needed.

The ultimate end game for the automaker, however, is solid-state batteries. These liquid-free cells have been touted as the heir apparent to lithium-ion batteries because they have the potential to be lighter, safer, and more powerful.

Already, Volkswagen has invested more $300 million in the San-Jose based battery startup QuantumScape. Its cells, currently at the proof-of-concept stage, have been demonstrated to increase an EV’s range by 30 percent and cut charging time in half (to roughly 12 minutes for enough energy for a 280-mile journey, which is the distance from Los Angeles to Las Vegas, or Leipzig to Munich). [READ MORE]