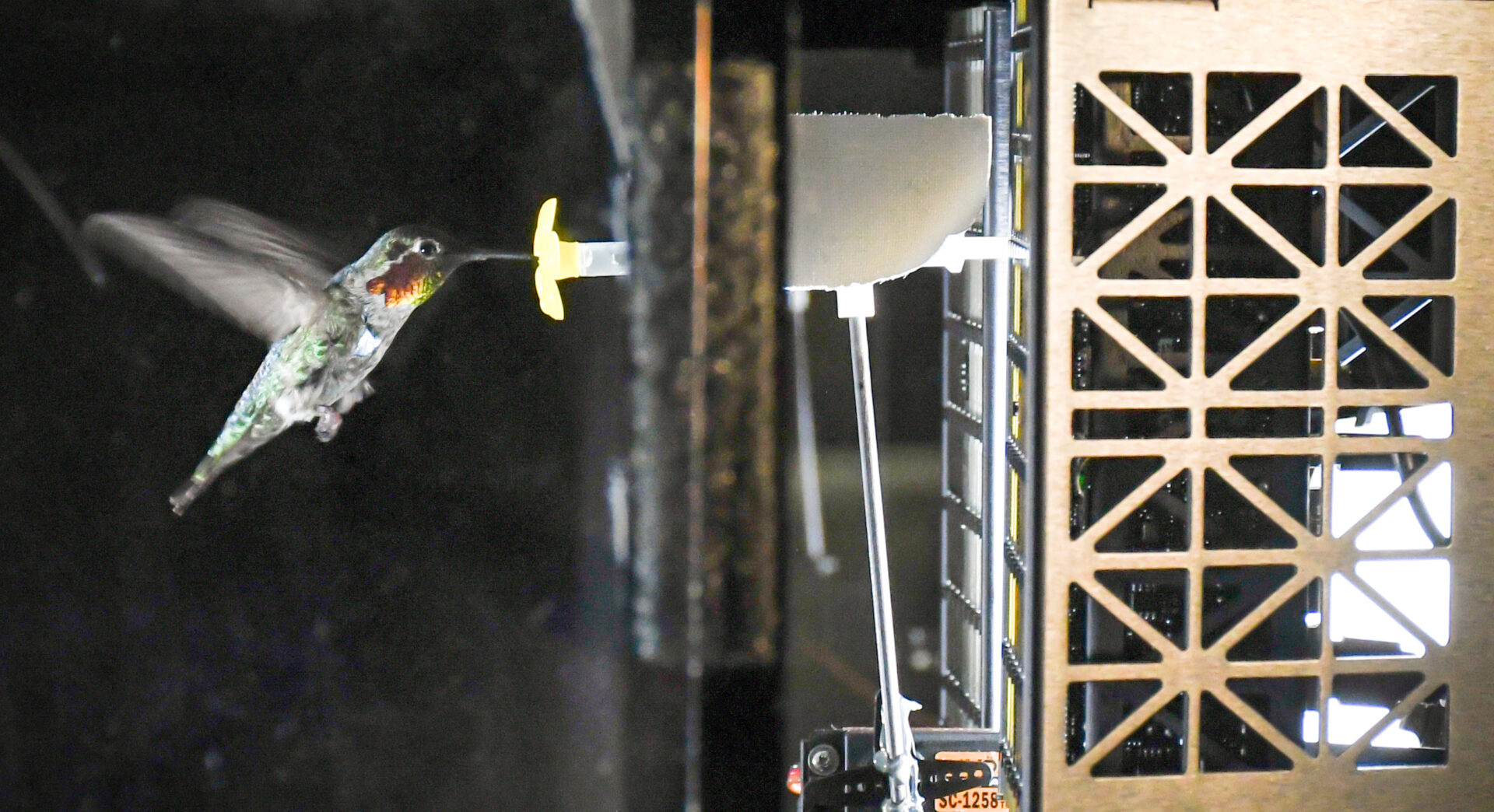 Hummingbirds hum. It’s right there in the name. And it seems fairly straightforward to say that the reason they hum is because they’ve got a pair of tiny wings that are whipping back and forth forty times every second. A more accurate thing to say, however, is that those lil’ wings are generating sound, and that presumably they’re doing so in a similar way to the wings of other birds, insects, bats, and even winged robots. But all of these sounds are very different; and why hummingbirds actually hum in that distinctive way when other flying things don’t is not obvious at all.

Researchers from Eindhoven University of Technology, Stanford University, and an acoustic camera company called Sorama teamed up to study half a dozen hummingbirds using 2176 microphones. They then spent three years analyzing the data to determine the source of, as one researcher put it, “a psychoacoustic auditory experience that many people find pleasing.” In doing so, they’ve managed to come up with a model of how flapping wings make the sounds that they do, potentially leading to (among other things) quieter, more efficient drones.

The motivation for this research, as far as I can make out, is pure basic scientific curiosity: Why the heck do hummingbirds sound the way that they do? And in particular, what causes the hummingbird’s hum to be pleasant, and what could that level of understanding tell us about other things with flapping wings, some of which (like flies and mosquitoes) are much less pleasant to listen to.

“Noise often has a spectrum that humans find annoying— this is subjective—and [it’s] called psychoacoustics,” said Rick Scholte, one of the authors of a paper published today in the journal eLife, when we asked him to describe the noise that a hummingbird makes. “In contrast, the hummingbird’s hum has a specific spectrum [comprising] many harmonic tones, frequency peaks, that are integer multiples of the first harmonic, and together result in a psychoacoustic auditory experience that many people find pleasing.”

The harmonics in the hummingbird’s hum are primarily caused by the pressure waves radiated from changing lift and drag forces as the wings flap back and forth. These harmonics are unique among birds, because a hummingbird generates lift with both the upstroke and the downstroke of its wings. While other birds generate a base wingbeat frequency that tops out at about 10 hertz (which we can’t hear), a hummingbird’s 40 Hz base wingbeat frequency is within the lower range of human hearing, giving a nice low foundation that the harmonics can build on. The real trick, though, is figuring out exactly what those harmonics are, and exactly where they came from. And for that, you need some hummingbirds, some high speed cameras, and some microphones.

This is an array of 12 high-speed cameras, 6 pressure plates, and 2176 microphones, which were provided by a company called Sorama that specializes in very-high-resolution acoustic imaging. At the center of it all there is, occasionally, an Anna’s hummingbird. The hummingbird, which has been birdnapped for a few hours, may fly up and sip nectar from a plastic flower whenever it likes, and as it does so, a truly astonishing amount of extraordinarily high resolution data are collected about the hum that it makes. The hummingbird is then returned to the wild, and the researchers get to work synchronizing the camera, microphone, and pressure data to pinpoint exactly what part of the hummingbird’s wing is generating what sounds and when. “For the first time,” Sorama CEO Rick Scholte says, “we temporally and spatially resolved the aerodynamic source of the hummingbird’s hum in exquisite detail.”

Understanding those aerodynamics, embodied in the 3D oscillating lift and drag forces generated by the hummingbird’s wings, allowed the researchers to develop from first principles a generalized 3D acoustics model for flapping wings. The model accurately predicts the acoustic spectrum of a wing based on wing size, wingbeat frequency, stroke amplitude and weight support profile. The model isn’t hummingbird specific, and in fact, it’s not even bird specific; the researchers discovered that their model can provide valuable insight into the wing sounds of insects, bats, and even flying robots that use flapping wings. “This research gives the insight to make robotic hummingbirds sound more like and perform more like the real thing,” Scholte says. “For the robot to generate the same lift and drag force we measured during the wingbeat of a real hummingbird, the wing kinematics need to be the same. And since flight performance directly depends on the lift and drag the wing generates, basically, what you hear is what you get in terms of the aerodynamic performance of flapping wings.”