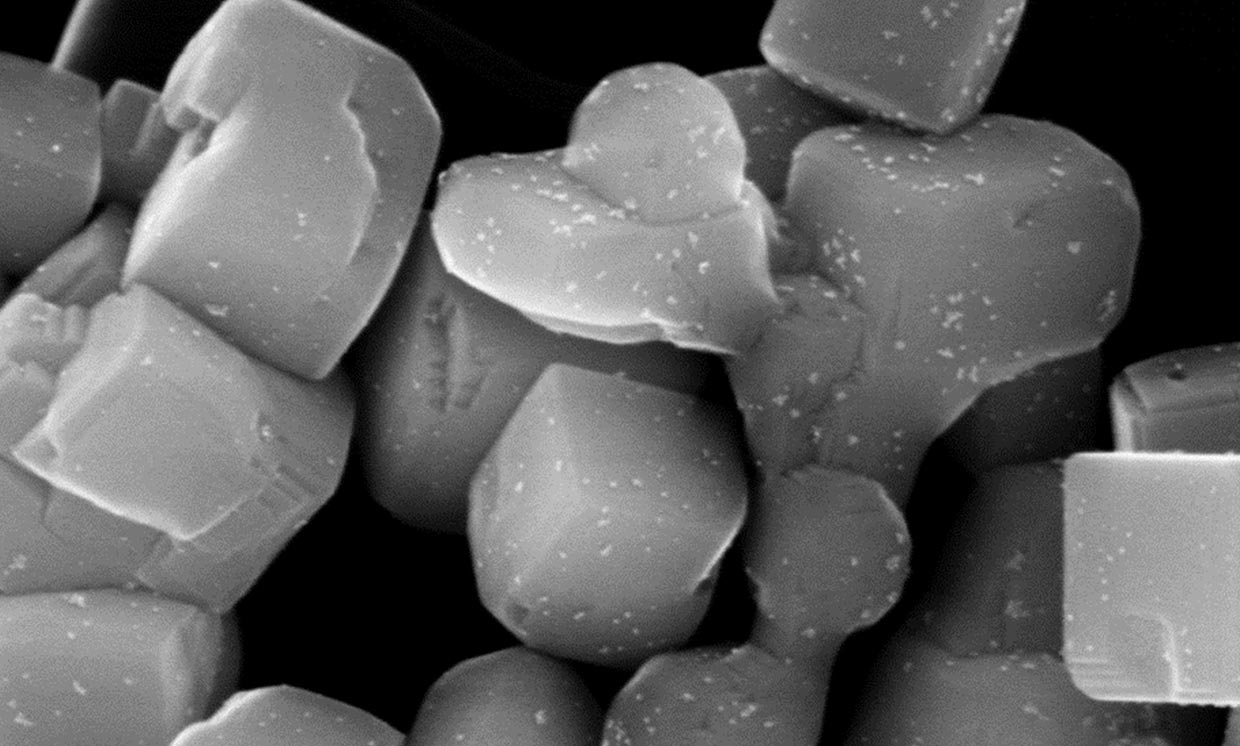 Converting sunlight into hydrogen is a seemingly ideal way to address the world’s energy challenges. The process doesn’t directly involve fossil fuels or create any greenhouse gas emissions. The resulting hydrogen can power fuel-cell systems in vehicles, ships, and trains; it can feed into the electrical grid or be used to make chemicals and steel. For now, though, that clean energy vision mainly exists in the lab.

Recently, Japanese researchers said they’ve made an important step toward making vast amounts of hydrogen using solar energy. The team from Shinshu University in Nagano studies light-absorbing materials to split the hydrogen and oxygen molecules in water. Now they’ve developed a two-step method that is dramatically more efficient at generating hydrogen from a photocatalytic reaction.

The researchers began with barium tantalum oxynitride (BaTaO2N), a semiconductor material that can absorb light at up to 650 nanometers (a visible wavelength at the orange end of red). The powdery substance serves as the photocatalyst, harnessing solar energy needed to drive the reaction. They also used an aqueous methanol solution instead of water, which allowed them to focus only on the hydrogen component and reduce the complexity of the reaction.

By itself, BaTaO2N can hardly “evolve” hydrogen gas from the solution. So, using their new method, the Shinshu team “loaded” the powder granules with a platinum-based cocatalyst to improve the chemical activity.

As a result, the materials evolved hydrogen much more efficiently—about 100 times as efficiently—than BaTaO2N that’s been loaded with platinum using conventional methods, according to their paper in the journal Nature Communications.

Takashi Hisatomi, a coauthor of the study, said the results are a “remarkable finding” in this research field. Hisatomi is a professor with Shinshu’s Research Initiative for Supra-Materials, in Nagano, and he has studied BaTaO2N for nearly a decade. “This is personally very exciting for me,” he said of the 100-fold improvement.

Solar energy experts have called efforts to make hydrogen more easily or efficiently a “Holy Grail quest.” When used in fuel-cell-powered vehicles or buildings, the odorless gas doesn’t produce emissions or air pollution—just a little heat and water. However, nearly all hydrogen today is made using an industrial process that involves natural gas, which ultimately pumps more emissions into the atmosphere. A handful of facilities can make “green” hydrogen using renewable electricity to split water molecules, but the process itself is energy intensive. If scientists can directly make hydrogen from the sun’s energy, they could bypass this expensive step.

In Belgium, a team at Katholieke Universiteit Leuven is developing solar panels that collect moisture in the air, then use chemical and biological components to split water directly on the surface. The researchers envision putting these panels on top of houses, allowing people to heat their homes with hydrogen gas made on site. Separately, Israeli and Italian scientists are advancing methods to extract as much hydrogen as possible from solar-to-chemical energy conversion. The international group has developed rod-shaped nanoparticles, tipped with platinum spheres, that prevent hydrogen and oxygen from recombining after the molecules are separated.

At Shinshu, the researchers sought to improve the efficiency of the BaTaO2N photocatalyst by depositing the platinum-based cocatalyst. But the conventional methods for doing so weren’t initially effective, Hisatomi said.  [READ MORE]