The Truth About Terahertz 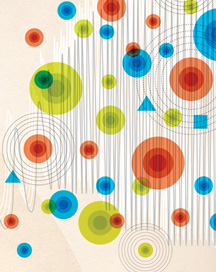 Wirelessly transfer huge files in the blink of an eye! Detect bombs, poison gas clouds, and concealed weapons from afar! Peer through walls with T-ray vision! You can do it all with terahertz technology—or so you might believe after perusing popular accounts of the subject.

The truth is a bit more nuanced. The terahertz regime is that promising yet vexing slice of the electromagnetic spectrum that lies between the microwave and the optical, corresponding to frequencies of about 300 billion hertz to 10 trillion hertz (or if you prefer, wavelengths of 1 millimeter down to 30 micrometers). This radiation does have some uniquely attractive qualities: For example, it can yield extremely high-resolution images and move vast amounts of data quickly. And yet it is nonionizing, meaning its photons are not energetic enough to knock electrons off atoms and molecules in human tissue, which could trigger harmful chemical reactions. The waves also stimulate molecular and electronic motions in many materials—reflecting off some, propagating through others, and being absorbed by the rest. These features have been exploited in laboratory demonstrations to identify explosives, reveal hidden weapons, check for defects in tiles on the space shuttle, and screen for skin cancer and tooth decay.

But the goal of turning such laboratory phenomena into real-world applications has proved elusive. Legions of researchers have struggled with that challenge for decades.

The past 10 years have seen the most intense work to tame and harness the power of the terahertz regime. I first became aware of the extent of these efforts in 2007, when I cochaired a U.S. government panel that reviewed compact terahertz sources. The review’s chief goal was to determine the state of the technology. We heard from about 30 R&D teams, and by the end we had a good idea of where things stood. What the review failed to do, though, was give a clear picture of the many challenges of exploiting the terahertz regime. What I really wanted were answers to questions like, What exactly are terahertz frequencies best suited for? And how demanding are they to produce, control, apply, and otherwise manipulate?

So I launched my own investigation. I studied the key issues in developing three of the applications that have been widely discussed in defense, security, and law-enforcement circles: communication and radar, identification of harmful substances from a distance, and through-wall imaging. I also looked at the 20 or so compact terahertz sources covered in the 2007 review, to see if they shared any performance challenges, despite their different designs and features. I recently updated my findings, although much of what I concluded then still holds true now. [READ MORE]