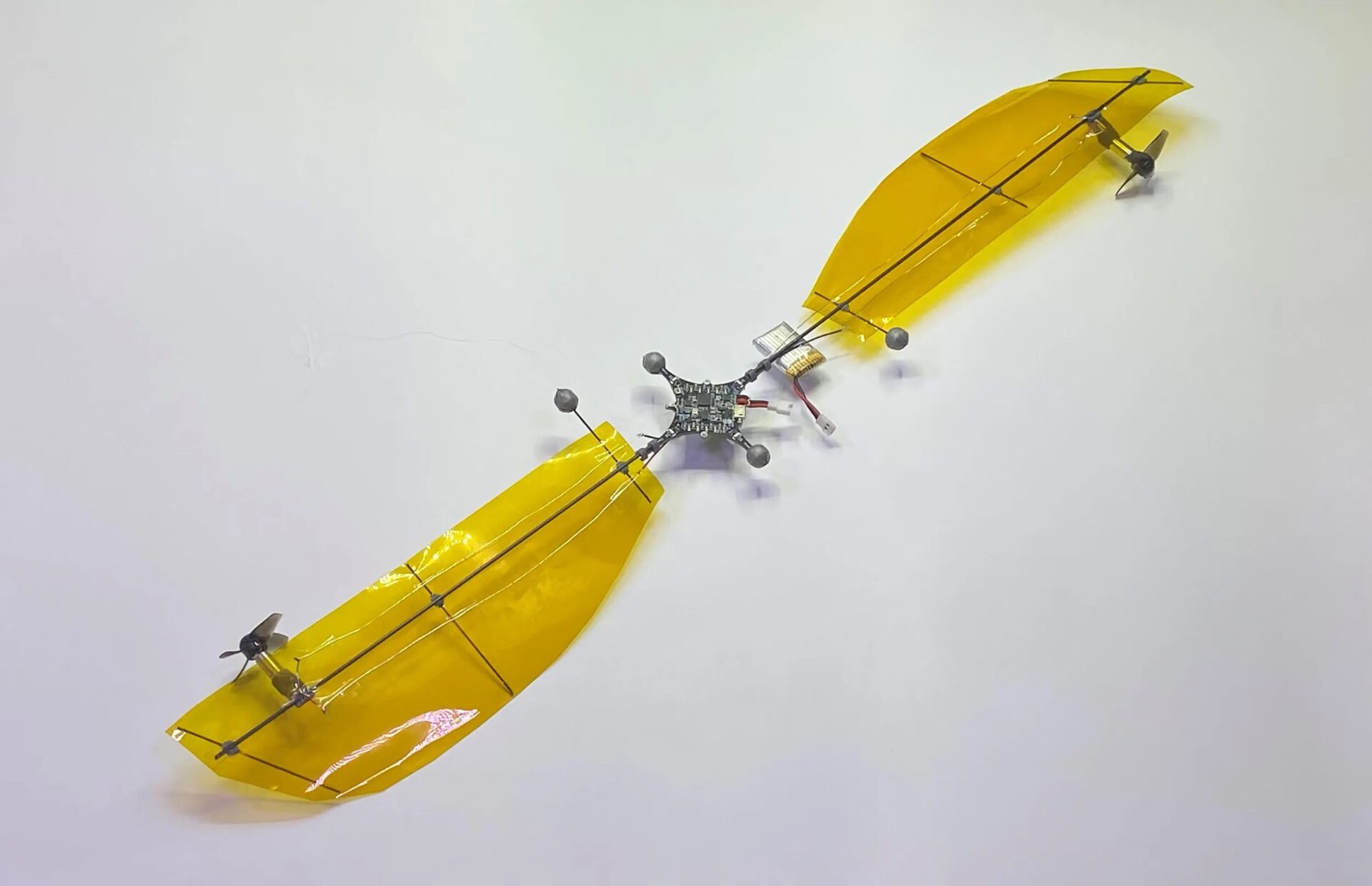 The relatively simple and now quite pervasive quadrotor design for drones emphasizes performance and manufacturability, which is fine, but there are some trade-offs—namely, endurance. Four motors with rapidly spinning tiny blades suck up battery power, and while consumer drones have mitigated this somewhat by hauling around ever-larger batteries, the fundamental problem is one of efficiency in flight.

In a paper published this week in Science Robotics, researchers from the City University of Hong Kong have come up with a drone inspired by maple seeds that weighs less than 50 grams but can hold a stable hover for over 24 minutes.

Maple seed pods, also called samaras, are those things you see whirling down from maple trees in the fall, helicopter style. The seed pods are optimized for maximum air time through efficient rotating flight, thanks to an evolutionary design process that rewards the distance traveled from the parent tree, resulting in a relatively large wing with a high ratio of wing to payload.

Samara drones (or monocopters, more generally) have been around for quite a while. They make excellent passive spinny gliders when dropped in midair, and they can also achieve powered flight with the addition of a propulsion system on the tip of the wing. This particular design is symmetrical, using two sizable wings, each with a tip propeller.

The bicopter is inherently stable, with the wings acting as aerodynamic dampers that result in passive-attitude stabilization, something that even humans tend to struggle with. With a small battery, the drone weighs just 35 grams with a wingspan of about 60 centimeters. The key to the efficiency is that unlike most propellerized drones, the propellers aren’t being used for lift—they’re being used to spin the wings, and that’s where the lift comes from. Full 3D control is achieved by carefully pulsing the propellers at specific points in the rotation of the vehicle to translate in any direction. With a 650-milliampere-hour battery (contributing to a total vehicle mass of 42.5 g), the drone is able to hover in place for 24.5 minutes. The ratio of mass to power consumption that this represents is about twice as good as other small multirotor drones.

You may be wondering just how fundamentally useful a platform like this is if it’s constantly spinning. Some sensors simply don’t care about spinning, while other sensors have to spin themselves if they’re not already spinning, so it’s easy to see how this spinning effect could actually be a benefit for, say, lidar. Cameras are a bit more complicated, but by syncing the camera frame rate to the spin rate of the drone, the researchers were able to use a 22-g camera payload to capture four 3.5 fps videos simultaneously, recording video of every direction at once.

Despite the advantages of these samara-inspired designs, we haven’t seen them make much progress out of research contexts, which is a real shame. The added complication seems to be enough that at least for most consumer and research applications, it’s just easier to build traditional quadrotors. Near-term applications might be situations in which you need lightweight, relatively long-duration, functional-aerial-mapping, or surveillance systems.

“A bioinspired revolving-wing drone with passive attitude stability and efficient hovering flight,” by Songnan Bai, Qingning He, and Pakpong Chirarattananon from the City University of Hong Kong, is published in Science Robotics. [READ MORE]