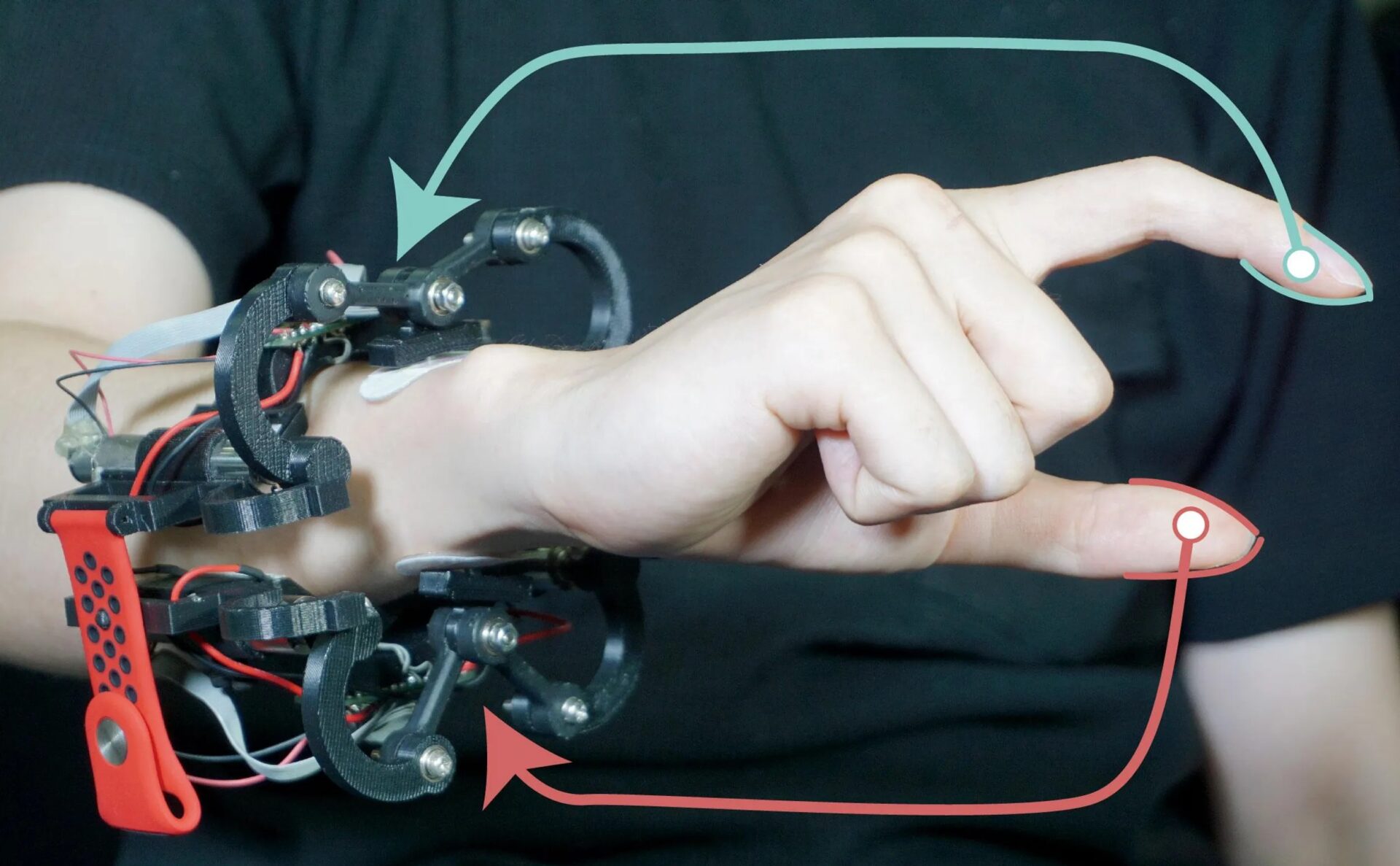 Virtual-reality headsets allow people to immerse themselves in a completely different environment, but some researchers are interested in expanding these fantasy worlds beyond just visual and acoustic sensations. For example, many groups have been searching for ways to incorporate touch sensation into VR.

One challenge around simulating physical touch, however, is the bulky hardware worn on the hands to emulate the sensations. This is especially true if the aim is to create physical sensations with multiple degrees of freedom (whereby sensations have different strengths and directions of force), because hardware would be needed to nudge the user’s hands from multiple angles.

Taha Moriyama is a researcher at the University of Electro-Communications, in Chofu, Japan. He has been captivated by the various VR systems such as HTC’s Vive, Oculus, and PlayStation VR since the products first hit the market.

“After experiencing VR in stores, amusement centers, and at friends’ houses, I thought it would be more impressive if I could actually touch and interact with VR objects,” explains Moriyama, who has been studying ways to incorporate haptics into VR ever since.

In his latest research with colleague Hiroyuki Kajimoto, he has developed a new approach to VR haptics that sidesteps the need for hardware on a user’s hands. Instead, haptics sensations are applied to the person’s forearm. The two describe this novel approach in a study published in IEEE Transactions on Haptics, in January.

The system can be 3D printed and weighs just 250 grams. It includes an external sensor camera that tracks the finger movements of the user. Haptics sensations are then applied to the top, bottom, or sides of the forearm to match the movements of the fingers. For example, moving a finger on a VR object to the left and right applies a left-right shear force to the forearm, and the system moves up and down in response to a finger’s up and down motion.

In their study, Kajimoto and Moriyama recruited 11 volunteers and assessed their comfort levels with the device while completing the simple task of grasping a VR object and moving it to a predetermined position.

“We were surprised that even with this new haptic presentation method, we were able to obtain a high comfort level without any training time,” says Moriyama.

Since the physical sensation is being applied to the forearm, it is perhaps not surprising that users reported the sensation as “symbolic” of moving a VR object, rather than feeling as though they were truly grasping a real object. However, the key advantage to this approach of manipulating the forearm is that it allows users to enjoy physical, hands-free VR sensations.

“In future work, we intend to design a device, based on our proposed device, that can present vibration and temperature,” says Moriyama. [READ MORE]